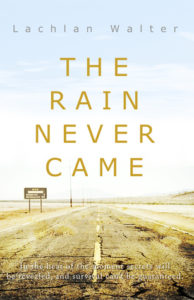 In a thirsty, drought-stricken Australia, the country is well and truly sunburnt. As the Eastern states are evacuated to more appealing climates, a stubborn few resist the forced removal. They hide out in small country towns – where no one would ever bother looking.

Bill Cook and Tobe Cousins are united in their disregard of the law. Aussie larrikins, they pass their hot, monotonous existence drinking at the barely standing pub.

When strange lights appear across the Western sky, it seems that those embittered by the drought are seeking revenge. And Bill and Tobe are in their path. In the heat of the moment secrets will be revealed, and survival can’t be guaranteed.

Available from Amazon, Booktopia, The Book Depository and Odyssey Books

Without the slightest warning, a raging noise blew in – a roar that tore through the night and shook the earth. The dogs out the front of the pub started howling. Conversations faltered as everyone fell quiet. The noise kept on, steadily growing louder. Tobe and I turned, scanning the sky, seeing nothing. I looked over at him – he was already running for the road, heading for the hill behind the pub.

I followed, unexpectedly clearheaded, taking everything in as if it had been laid out on display.

Everyone ran with us. Sheldon huffed and puffed, cursing his old body. Louise jogged next to me, smiled at me, rapidly overtook me. The Veidts hurried along, somehow making the process look dignified. Max and Maxine moved fast yet made it look like they were taking it easy. Cathy Ng half-limped and half-ran, clutching at her dressing gown, trying not to catch herself in it. The Kumari Kid darted back and forth, circling the crowd, urging everyone to move faster. The First Country captain led his people on, trailing well behind, watchful and wary.

We kept running. We crested the hill. We all stood in silence, raggedly trying to catch our collective breath.

The wind started, furnace-hot. Its screaming whine and the roar that tore through the sky were the only sounds in the world. From the corner of my eye I saw someone lick their finger and hold it up in the air. I heard someone else say: “It’s coming from the west, dickhead.” And then the word rain seemed to be falling from everyone’s lips.

A flash lit up the horizon, staining the sky dull-orange and crimson-red. Someone started yelling: “Light! Light! Light to the west!”

For a moment, it burned too bright, blinding me. It soon faded away, only to then happen repeatedly. I looked around; everyone seemed to have their eyes shut and their fists clenched.

We waited, all eyes fixed on the horizon, everyone saying the same word over and over: Rain! Rain! Rain! But none came. After a while, people started drifting away and the only sound left was their angry mutterings and disappointed sighs. I turned my back on the horizon as well. Like everyone else, I stared at the ground as I walked. No one wanted to look anyone else in the eye.

What People are Saying

“I was expecting a point to be made—and it turns out to be that communities endure, and that even in the midst of misery people frequently choose to be kind. That hardship doesn’t mean the end of moral development; that really only in hardship can our morals calcify into something tangible and trustworthy. This underlying sense of optimism is very welcome in post-apocalyptic fiction… Bill and Tobe, quintessential piss-taking Aussie blokes as they are, capable of tramping through bush, skinning kangaroos, and being in general the stereotypical manly men, are also both very open with their emotions. They hug a lot, they cry a lot. They don’t consider emotion to be weakness, in others or in themselves, and there’s something very refreshing about all this… Walter constantly goes back to the land in this novel, using it as the touchstone reminder of devastation, and of apocalypse. Readers are never allowed to forget the enormity of the ecological devastation that’s at the very centre of this narrative, and neither are the characters.”

Lachlan Walter is a writer and critic whose debut novel The Rain Never Came has recently been released. He will be in discussion with Jeremy Stanford about science fiction and fantasy writing on Saturday August 25 at 12.45pm. Don’t miss out on this session, book tickets here.