One of the real pleasures of Words in Winter is getting to hear those fascinating insights about a favourite book, directly from the author. In this series of posts, we will be introducing some of this year’s guest speakers, and reviewing one of their works. Hopefully this will help to inform your pre-festival reading list, and maybe even help you find a new favourite.

This week, Kevin Childs has written a review of Reason and Lovelessness by Barry Hill. 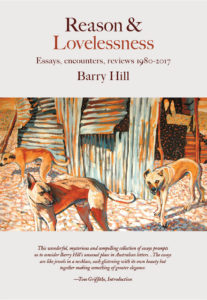 Multi-award winning writer of poetry, history, biography, fiction and reportage Barry Hill, will be a highlight of the festival.

His new essay collection, Reason and Lovelessness  includes offshoots ’ of major works such as his  landmark memoir in union history Sitting In (1992), a literary biography on Aboriginal and frontier poetry, Broken Song: TGH Strehlow and Aboriginal Possession (2002); and a pilgrimage book about Rabindranath Tagore and Mahatma Gandhi in the years leading up to the atomic bombing of Hiroshima and Nagasaki, Peacemongers (2014),

New essays include ‘Brecht’s Song’, on his working-class mother; ‘Dark Star’, an expansion of his meeting with Christina Stead on her 80th birthday; ‘Loving Roughneck’, his critical appreciation of John Berger; and ‘On the Edge of the Cliff’, on his private meeting with the Dalai Lama in the Blue Mountains.

His essays are profound, candid and marry the philosophical with the deeply personal. Hill was born in Australia and educated in Melbourne and London, where he worked as a psychologist and a journalist (the Age and the Times Educational Supplement).

His short fiction has been widely anthologised, some of it translated into Chinese and Japanese. He writes libretti and has done much work for radio. Broken Song: TGH Strehlow and Aboriginal Possession (Knopf 2002) has been described as ‘one of the great Australian books’ (John Mulvaney) and ‘a major event in Australian high culture’ (Robert Manne).