One of the real pleasures of Words in Winter is getting to hear those fascinating insights about a favourite book, directly from the author. In this series of posts, we will be introducing some of this year’s guest speakers, and reviewing one of their works. Hopefully this will help to inform your pre-festival reading list, and maybe even help you find a new favourite.

This week, Kevin Childs has written a review of The Good Country by Bain Attwood. 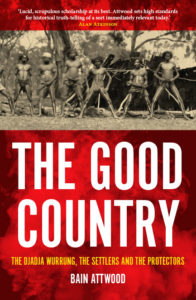 Just what really went on in the early days of white settlement in central Victoria is explored in a fascinating new book by Bain Attwood, who’s a guest at Words in Winter.

In The Good Country he meticulously scrutinises how settlers regarded the Indigenous as both primitive and inferior and saw the land as for the taking. Aboriginals were a doomed race, ran the argument, and their offspring should be taken and assimilated. In this, the settlers were backed by the law.

Professor Attwood looks at what happened to the Djadja Wurrung and the 40 fatalities (10 of them white) between 1838 and 1842. Smallpox and the hostility of the neighbouring Daung Wurrung played its part, as did the implacable attitude of some settlers, their convict employees and police, bred out of bitter experience in Tasmania, with its Black War. Other pastoralists, however, showed tolerance and compassion.

No convictions were recorded against those who killed Djadja Wurrung. Clashes were inevitable as food sources were lost to sheep and cattle. The Djadja Wurrung tried to accommodate the newcomers, working on stations, trading with gold miners and seeking survival on reservations.

Ultimately, they were moved to Healesville.

It is a complicated story, not just of resistance, invasion and dispossession, but much more, and one that is worth hearing.

Bain Attwood is a leading scholar in the field of cross-cultural history. He is professor in the School of Historical Studies, Monash University, and adjunct professor in the Centre for Cross-Cultural Research, The Australian National University. He is the author of The Making of the Aborigines, Rights for Aborigines, Telling the Truth about Aboriginal History and Possession: Batman’s Treaty and the Matter of History.

Mr Attwood will be speaking at Words in Winter on Saturday the 18th August.